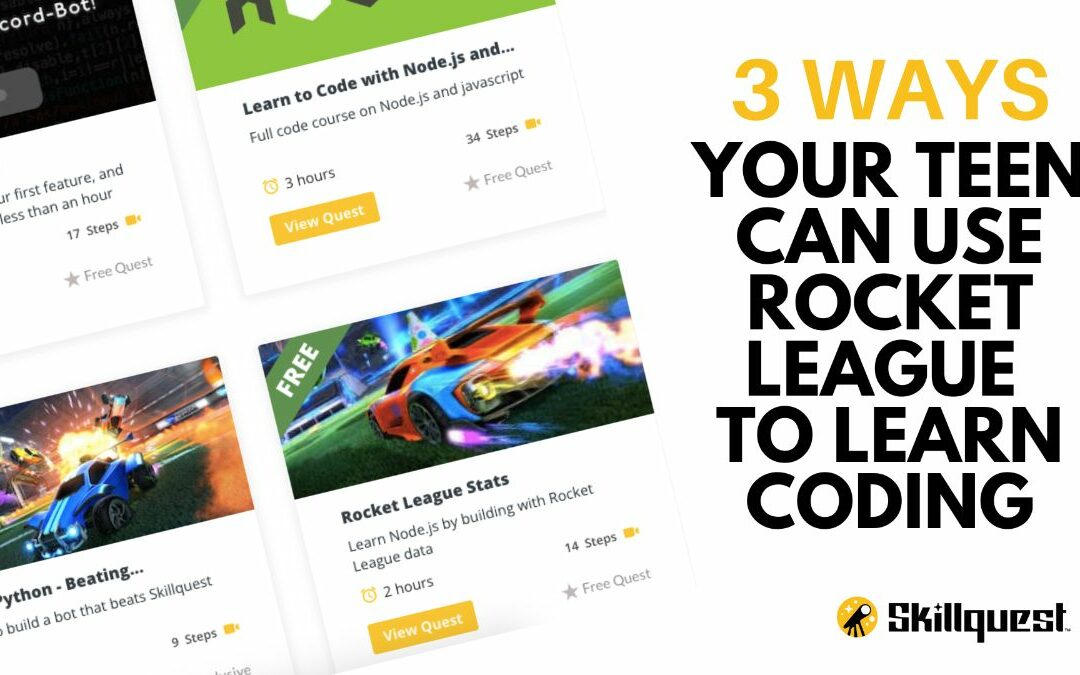 Why Rocket League is the Best Game to Learn to Code

Rocket League is a great platform for teens to learn to code because it’s FREE, it’s engaging, and you can learn the most popular languages in depth.

Unlike some other games, Rocket League is FREE, which means that it’s easy to use the game to begin learning code. Many other games that offer modding come with a cost (e.g. Minecraft), and many free games don’t offer modding (e.g. Fortnite or VALORANT).

Engagement is the number one indicator of learning outcomes, and Rocket League holds attention. If the platform or game you’re looking at for learning to code is fun, learners will get more out of it. If it seems even SLIGHTLY boring, that will be magnified 100x when learners dig in. Pick a fun way to learn.

The most popular languages and frameworks can be taught with Rocket League. Scratch, Python, Node.js… almost any language can be applied to the game. In addition, you can learn about bots, web servers, and data science. Let’s unpack some of the ways that anyone can start learning to code RIGHT NOW through Rocket League.

DISCLAIMER: These ideas will not be “take a class on…” or “learn the theory of…” I’m an advocate of learning by doing because you shouldn’t ever have to ask, “why am I learning this?” Plus, at the end of building something meaningful, you’ll get a project for a portfolio that can actually land a job or a scholarship.

1. Learn to Code by Building a Bot That Plays Rocket League

Ever wondered if you can build a bot that plays Rocket League? Psyonix, the game’s developer, planned ahead and built a way for man-made bots to compete in-game! They don’t compete online, so it keeps things fair.

Building a Rocket League bot comes with all of the competitive benefits of gaming. Learners have plenty of competition to keep them engaged. And what’s more, it’s EASY to start, and provides a way to DEEPLY learn a coding language. As a software engineer myself, I can say that building a bot will teach everything one needs to know about a language. From there, learners are empowered to learn other platforms (like web APIs or automation engineering) without needing to worry about learning code syntax.

Start learning Python for FREE by building a Rocket League bot with Skillquest! Or get started with any of the other languages that are offered by RLBot.

2. Learn to Code by Building Your Own Discord or Twitch bot

Building bots is fun, fast, and allows you to do all kinds of useful or funny things. No matter what platform you want to build a bot for, the free Skillquest Discord Bot tutorial will equip you with a web server (the computer that runs your bot) AND the knowledge of how to integrate with a service. Once you build your web server, here are a couple of ideas for a cool bot:

Learning code is easier when you’re interested. Building something interesting makes it easier to:

It also gives you something you’re proud of.

3. Learn to Code by Building a Stats Integration

Data from Rocket League is fun and easy to work with, and is a jumping-off point to learn. Ever thought about building yourself a player profile, like Rocket League Tracker Network has (but better)? How about ranking yourself amongst your friends, or people in your Discord server, on the stats that are most important (like demos)? You can start now by using public game data made available by ballchasing.com. I teach how to download and work with this data in Node.js in this FREE Quest.

Let’s take one example of what you might build, and talk about how to do it and what you’ll learn. Let’s say you want to drum up some friendly competition by comparing stats with your friends.

You could build a simple process using Node.js that looks at today’s games played by a list of friends and ranks them for a certain stat, like demos. Then you could take that process and make it a Discord bot command (as mentioned above, you can learn Discord bots on Skillquest as well). So we’ll have a Discord command that ranks a player amongst their friends’ for the day’s games – that sounds pretty cool!

Follow the free Skillquest tutorial on how to get stats from ballchasing using Node.js. It teaches how to use replit to quickly run/iterate your program, as well the coding mechanics necessary to make this integration. The steps will be:

Again, if you follow the Node.js tutorial above, you should have the skills to start tackling this. Next, we’ll integrate it into a Discord bot.

EZ mode! Now you’ll have something fun, and to be honest, at this point you’ll have the skills to learn anything you need to about Rocket League data. Let’s talk about what you will have learned (but I’ll put these in terms you’d use on a resumé).

Despite the fact that this is a small project (probably spread out over a few days), those outcomes are enough to talk about in a hiring conversation for a software engineering job. And in the end, you’ll have proven to yourself that coding isn’t too scary. It just takes learning one step at a time.

Other Ideas to Learn Coding Skills with Rocket League

Whatever you choose to do, just know that coding is not all about theory and logic. It is about building something interesting, and you (or your child, or your friend, or your grandma) can start now.